I was Spartacus; I am Joe the Plumber 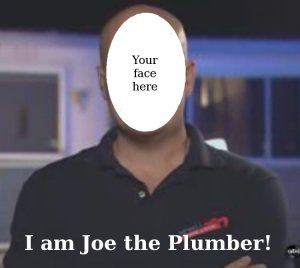 Joe the Plumber asked The One, The Messiah, Lord Barack Obama the Most Merciful, about his tax plans and how it would affect someone who was looking to buy a small plumbing business from its current owner. Now the modern Spartacus has been subjected to the Media’s and the Democrat Party’s, but I repeat myself, politics of personal destruction. They have started a hostile investigation of Joe. They are at war with Joe, just like they were at war with Bork, Thomas, Alito, Lieberman, and Sarah Palin before him. They chased down his voter registration, his apprenticeship papers, his back taxes, his plumber license, etc etc etc. Toledo is cracking down on him in the intent to prevent him from practicing his craft.

The left intends to threaten and frighten anyone who would speak against them into silence. They are truly the inheritors of the tactics of oppression used by the Ku Klux Klan, Nazis and Bolsheviks.

Everyone who speaks truth to Obama’s power is in danger of being attacked by Democrats and the Media. The perversely-named Fairness Doctrine is only one example of the Left’s deep hatred of free speech except for  speech they agree with. They intend to crush everybody’s rights to speak freely, not just the rights of radio employees and college students.

I am Joe the Plumber!

Try saying it yourself. Throw in some Howard Beall.

I am Joe the Plumber! I’m mad as hell, and I’m not going to take it anymore!

I mean it. Try it. Oh to be Joe the Plumber, steadfast foeman of the neocommies.

Watch Joe’s offense against The One END_OF_DOCUMENT_TOKEN_TO_BE_REPLACED

Gwen Ifill is moderator and managing editor of “Washington Week” and senior correspondent for “The NewsHour with Jim Lehrer.” She is also frequently asked to moderate debates in national elections, including the Vice Presidential debate during the 2004 election and the upcoming Vice Presidential debate scheduled for October. Ifill is also the author of the forthcoming book The Breakthrough: Politics and Race in the Age of Obama.

Notice that she is both the moderator for the Oct 2 VP debate and the author of an upcoming hagiography of Barack Obama. I choose the word hagiography with care. She argues that Obama is imbued with such numinous power, importance, and charisma that he is the Hero-Saint of the Age who lends the Age his name. This book is scheduled to be released on January 20, 2009. This is Inauguration Day. If Obama is elected president she stands to earn a lot of money. If he loses, not so much. This is like the person who shoes all the horses at the racetrack placing big-money, long-shot bets and hitting winners. In other words, it is fundamentally dishonest.

I have no idea whether Ifill intends to be unfair, but she certainly was perceived as unfair to Dick Cheney when he debated the adulterous John Edwards in the 2004 VP Debate. Even Democrats thought so, and they cheered for her because of it.

Ifill drew some criticism when Edwards attacked Cheney’s former employer, Halliburton, and the vice president said: “I can respond, Gwen, but it’s going to take more than 30 seconds.”

Ifill says now that Democratic partisans were delighted because they “thought I was being snippy to Cheney.” That, she says, was not her intent. Still, the consensus was that she acquitted herself well. [Wash Post]

Ifill was partisan once previously, when she moderated the 2004 VP debate. Democrats and Republicans both thought so. It’s not a party line opinion, but a considered judgment. Now she is publishing a book that will make her more money if one of the debaters she moderates wins than if the other prevails. This is a conflict of interest that should disqualify her from moderating the debate. Yet she carries on.

Both Gwen Ifill and the Debate Commission are responsible for this embarrassment. This will be a black mark on their reputations forever.

At the debate, Sarah Palin should hold up a copy of The Breakthrough: Politics and Race in the Age of Obama and ask Ifill to sign it, and then ask her if she can put her obvious political predilection aside and treat both debaters without partiality.

And then Ifill ought to be fired!